Alex Haas, born in New Hampshire in 1988, is a fine artist whose main forms 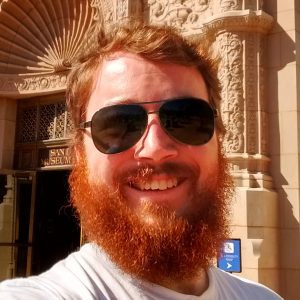 of expression are printmaking and illustration. As a child Alex’s enthusiasm for art pushed him towards his undergraduate studies at Bradley University in Peoria, IL. He studied printmaking there under professor Oscar J. Gillespie and received his Bachelor’s degree in 2010. After schooling, Alex began to travel, seeking out new modes of experience. During this period he worked with the Nashua Area Artists Association, Southern Graphics Council, Heuser Art Center, and individual artist’s like Heather Brammeier and Kayley Peak.

In 2014 Alex moved to Keelung, Taiwan and spent a year there teaching and working on adding new influence to his work. On June 27th 2015 Alex suffered from severe burns on over 90% of his body. He and roughly 500 other victims were affected by a terrible dust explosion and displaced from their lives in order to recover. Alex and many others made incredible recoveries thanks to the hard working medical staff and the thoughts and prayers of their friends and families.

After he was recovered enough from his injuries, Alex returned to the US for his aftercare. He currently uses his work to explore the world through his memories. Often depicting imagery of clouds, mountains, and forests, Alex’s work pieces together the different places he’s been during his travels and forms them into harmonious landscapes. Having been in an induced coma and under anesthesia for over 10 procedures, the artist has wondered about his own memory; expressing, in his art, how time has distorted the way he remembers his environment and how he views objects in their natural state.

Welcome to the work of Alexander Haas – a local printmaker. Follow his exploration of the printmaking world!

His prints that are in the gallery can be found under Artwork for Sale and Gallery Art in the toolbar above.